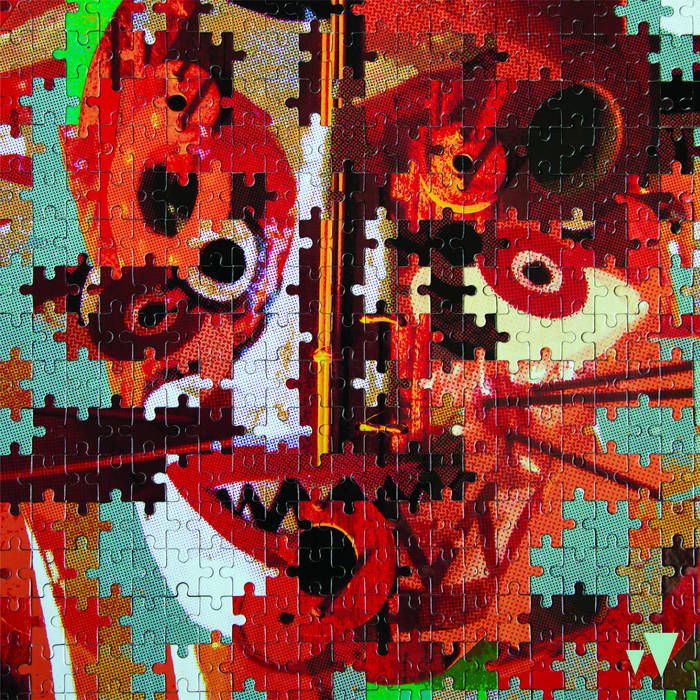 The Cybernetic Protochrist The kind of music that makes me drive way too fast without realizing it cuz I'm too busy violently convulsing in the driver's seat Favorite track: Levante.

Almost four centuries after the first slave ships loaded their cargoes and set sail, the connection between Brazil and West Africa remains firm and deep. It was African slaves who created the culture of Brazil in all its sorrows and its joys, and those memories have flowed down through the generations. Africa is everywhere in Brazil, and it pulses through the music on Quebra Cabeça (Puzzle), Bixiga 70’s second studio album for Glitterbeat, where two continents dance together across the black Atlantic.

“From the very beginning, what we have always had in common is African-Brazilian music,” explains baritone sax player and flautist Cuca Ferreira. ‘Some of us come from candomblé (the African-Caribbean religion), others from jazz, reggae, dub, everything. The whole idea of the band has been to take all these different elements that form us, from Africa and Brazil, and create a hybrid from them.”

With Quebra Cabeça, that hybrid has taken on a slightly different form. As Ferreira notes, this time Bixiga 70’s music “is more complex. We worked harder on the compositions than in the past, spent more time on them. Each song has a lot of different parts, they can seem like a journey.”

That’s apparent in the shifts and turns of a piece like “Pedra De Raio” or “Levante,” where the melody shifts and swerves, one section flowing naturally into the next, adding layer upon layer to create something astonishing and utterly satisfying in its power. In large part, this change has come from the band’s relentless touring over the last few years.

“We’ve been exposed to so much,” Ferreira notes. “So many of the people we’ve played with have had an impact on us, like Pat Thomas, the Ghanaian highlife singer or [Nigerian saxophonist] Orlando Julius. And then we toured and recorded with João Donato. He’s over 80 now and still playing piano, one of the icons of Brazilian music. We’ve learned from them all, they’ve made us think about what we can do with our music. Those new ideas have found their way into this album.”

One result is the new, shining lyricism of the melodies, with the horns pushed even more to the fore, parading around with a singer’s swagger.

“We want people to relate to our melodies, to take the line a vocalist might use and play it on the horns. Sometimes in instrumental music, the players are so good it ends up putting the listener at a distance. We make music as a celebration, a way to connect and bring some joy. We want to draw them in. We try to write something very memorable.”

And Quebra Cabeça is a very memorable set of hummable earworms, from the title cut that opens up the album and continuing, sinewy and cool and relentless, all the way to the final note of “Portal.”

Throughout though, the heartbeat of everything remains utterly African, refracted through the prism of the band’s home in the Bixiga neighbourhood of São Paulo. “What we put on top of that is essentially urban São Paulo music. This city has been a huge influence on us. It has that sense of urgency, always running to catch up. It’s expensive, and services are awful, with so much pollution and violence. But it’s our home and it was developed through immigration. Bixiga is where people come first of all. It’s always had that influx; it’s the story of São Paulo in miniature.”

And Bixiga 70 has always been a reflection of the streets where they live. The band played their first show in October 2010 and released their debut album a year later. Eight years on they are still the same 10-piece collective, honing and shaping the music, evolving towards the changes found on Quebra Cabeça.

“We knew we wanted this record to be different. Our other three albums were all recorded live in the studio, because we’re more of a live band, the stage is our habitat. This time we decided to use the studio to experiment with arrangements and voicings. We began composing in early 2017. It took us a year to write everything, then we began recording in May this year. And for the first time we used a co-producer, Gustavo Lenza (Céu, Marisa Monte). He was a friend even before we formed the band, but it recent years he’s become a very big producer in Brazil.”

The result still captures the incendiary excitement of Bixiga 70 live, but the freedom of the studio brings more shade and subtlety than before. The rhythms are more sinuous than ever, snaking through the funk in way that looks more to Ghana or Nigeria than Memphis or Muscle Shoals, while the horns strut in powerful harmonies. It’s music that forges connections and retraces history while sounding absolutely contemporary. But for Bixiga 70, African will always be the root, and Brazil its beautiful, vibrant flower.